Registration is now open for Wilton Softball's Spring 2023 Season!   Our recreational softball program is open to players from ages 5 -14.  Register now to join in the fun. 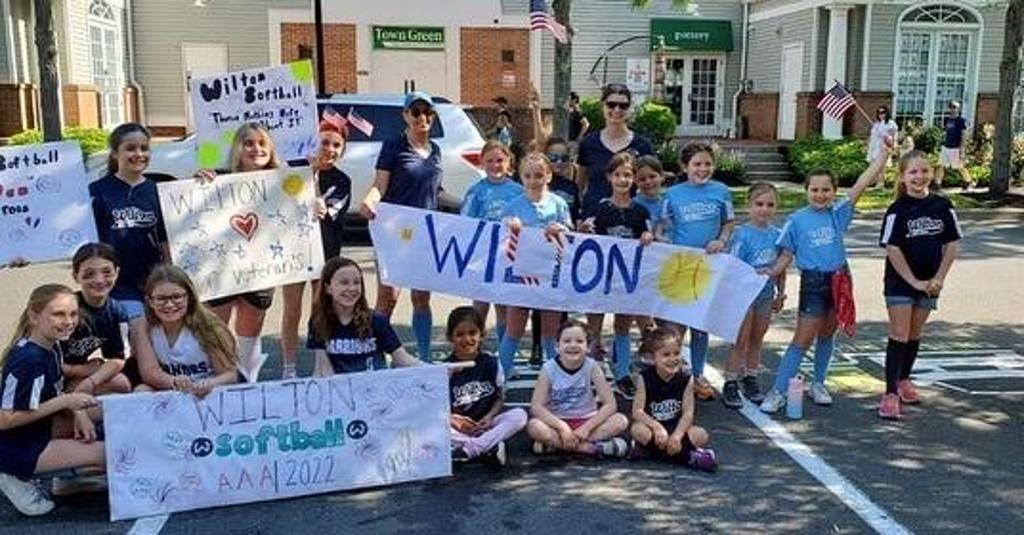 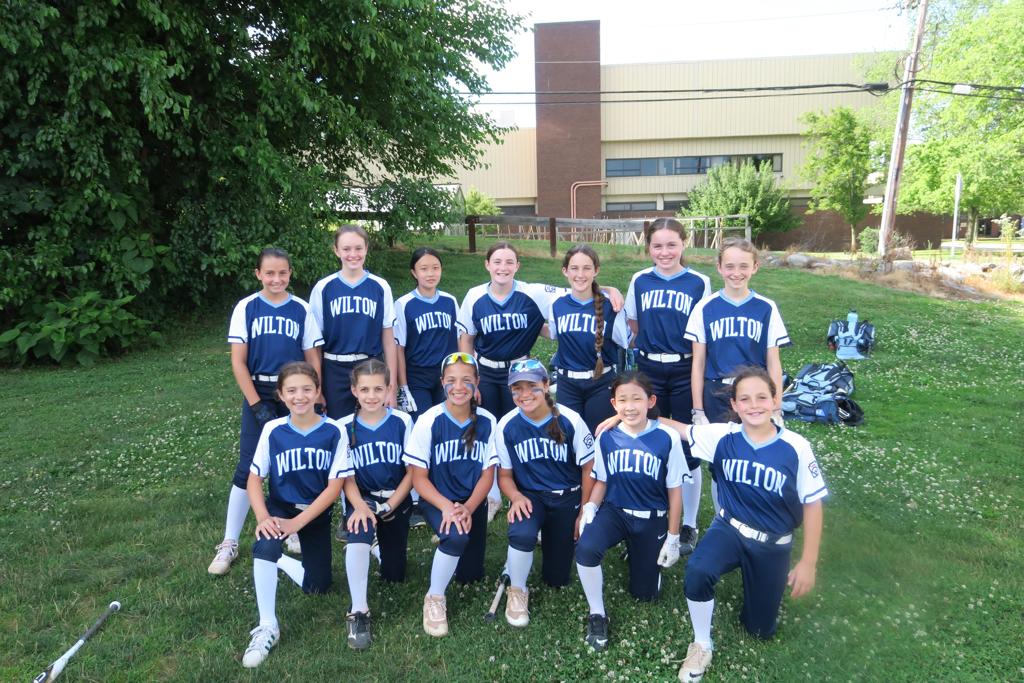 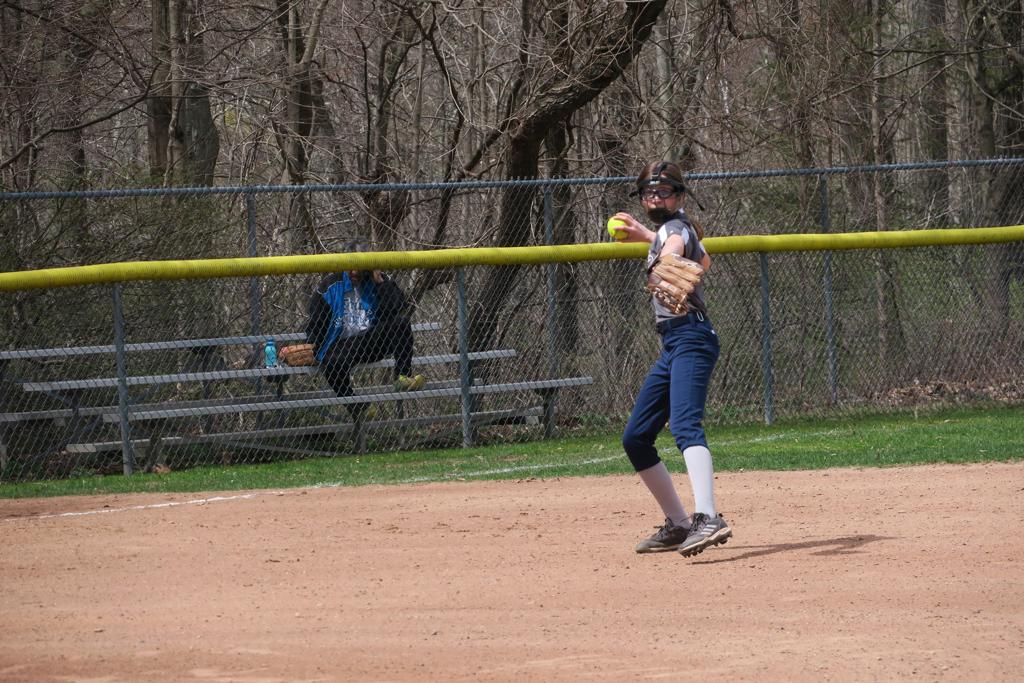 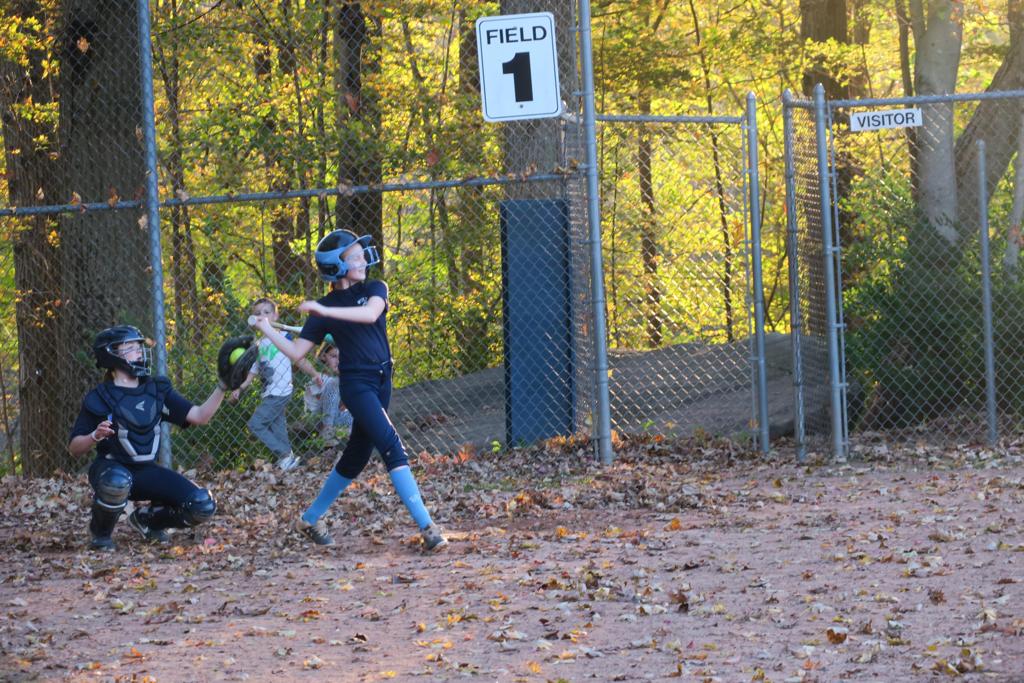 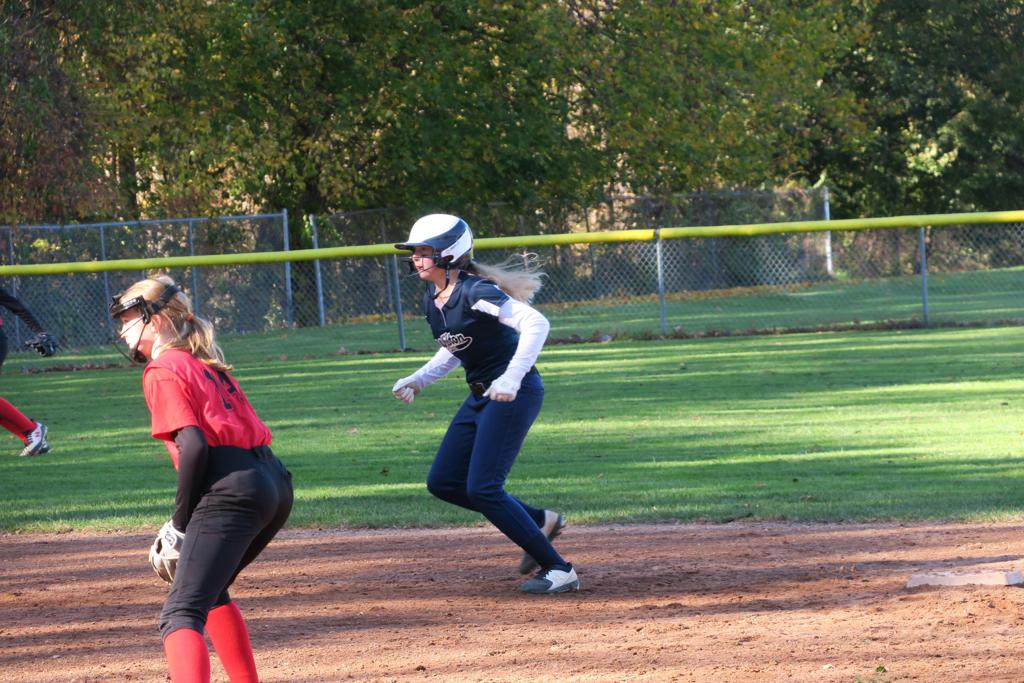 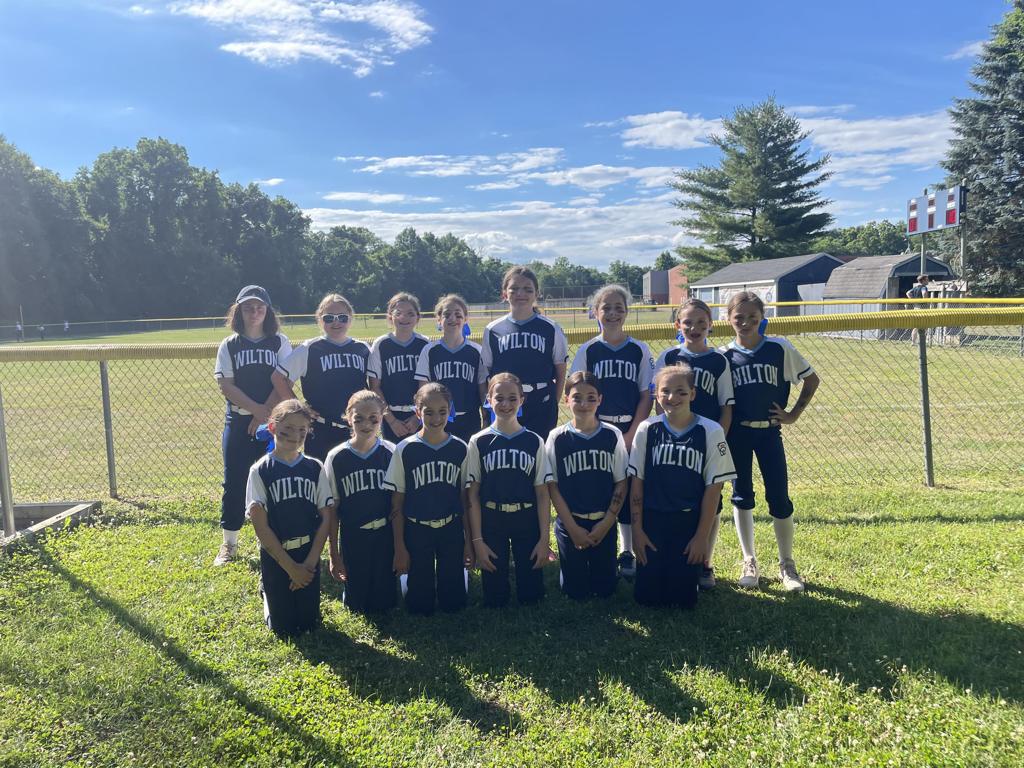 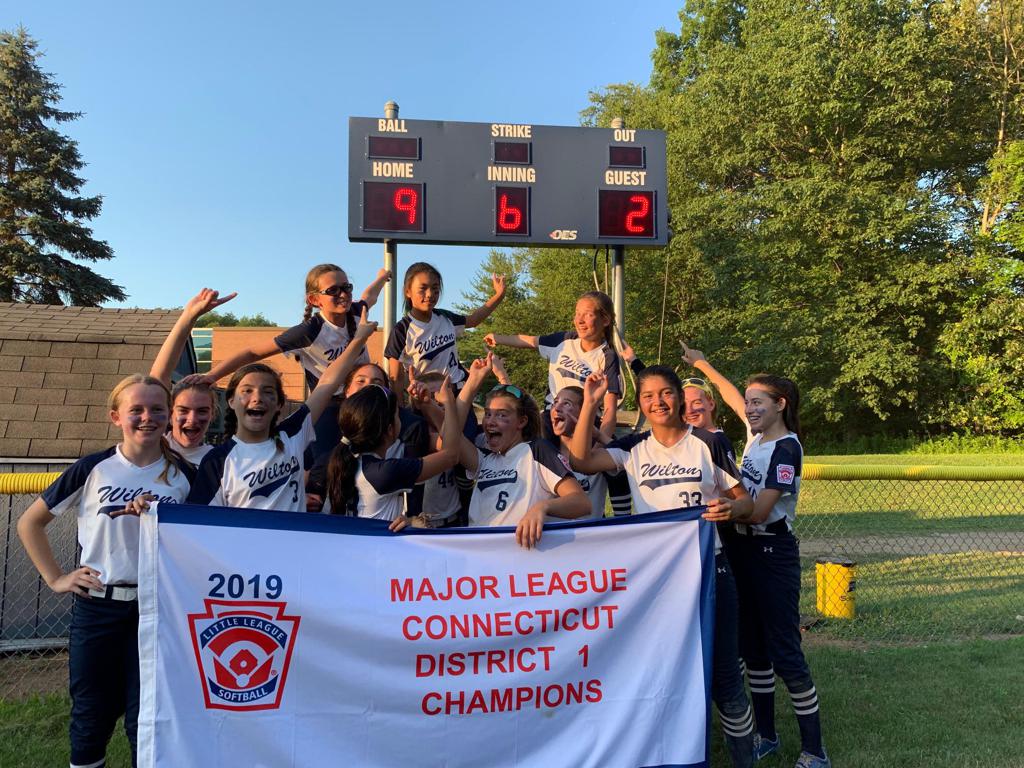 as reported in Good Morning Wilton

Wilton Little League 12U Softball has its championship banner. For the first time since 2004, before any of the players on the current 12U District All Star team were born, Wilton has won the Connecticut Little League District 1 championship by defeating Darien’s 12U District All Star team 9-2, on Tuesday, July 2. Wilton completed the District 1 tournament with a 3-and-0 record, outscoring its opponents 23-5 over the three-game span.

What made this tournament extremely special for the 12U team was the outstanding support from the Wilton community, especially for Games 2 and 3, which were held at Middlebrook School. Family members and friends, former coaches and players, coaches and players from Wilton’s 10U and 11U District All Star teams, coaches and players from Wilton’s 12U and 14U travel team–all took time out of their busy schedules to cheer on these young ladies, whose journey towards the District 1 championship began in March with pre-season practices for their respective Little League teams.

Wilton’s success was not dependent on a handful of players or a particular aspect of their game–their success was the direct result of countless hours of work as a team in the weeks leading up to Game 1. Back-up shortstop Kate Rusin and back-up second baseman Lucie Prior serving as baserunners in every practice to sharpen the timing of the infielders. Back-up first baseman Abby Schwartz and back-up third baseman Emma Kelly running cut-off drills to develop the speed and accuracy of the outfielders. Back-up catcher and unofficial team captain Eva Filipponi ensuring that the pitchers were prepared for each practice and each game.

In Game 3, Wilton’s defense stole the show. Right fielder Abby Seeberger, who contributed two hits and three runs on offense, made two back-to-back game-saving catches on line drives when the score was tight in the early innings, while left fielder Lauren Sanfilippo made the defensive play of the tournament with a circus catch in the fifth inning on a sinking fly ball. The defensive player of the tournament, second baseman Julia Nanos, recorded an assist and two put-outs, including, quite fittingly, the put-out that ended Game 3.

As was the case in Games 1 and 2, Wilton’s offense jumped on its opponent’s pitching early, scoring two runs in the first inning, and never let up, scoring one run in the second inning, five runs in the fourth inning and one run in the fifth inning. First baseman and offensive stand-out Lauren Davis, who held New Canaan to two runs in Game 2 as the pitcher, drove in two runs and scored another run with a 1-for-3 game. Shortstop Sadie Klyver continued to do what she does best:  put the bat on the ball in key situations and get on base. Klyver had one RBI and one run. Third baseman Allie Schwartz picked up where she left off at the end of Game 2, going two-for-two and driving in two runs in the fourth inning to put the game out of reach.  And all-star center fielder Marin Burke finished off an extraordinary tournament by collecting two hits, scoring two runs and driving in one run.

Picking one MVP for the tournament would have proven to be impossible, so two players deserve recognition not only for their overall performance during the tournament, but also for their efforts in the deciding game. Catcher Katie Kelly, who entered Game 3 as the leading hitter on the team in both batting average and RBI, continued her dominance of opponent pitching by going two-for-two with two RBI. Kelly also held the Darien running game in check, throwing out a would-be base stealer in the third inning. Kelly’s battery mate, pitcher Gracie DiBuono-Krafick, won her second start of the tournament, going six innings, giving up two hits and two runs (zero earned) and striking out four. DiBuono-Krafick held an excellent offensive team in Darien to four hits and three runs (zero earned) in two games, while striking out ten total batters, to guide Wilton to the championship.

Wilton is moving on to the Connecticut Sectionals tournament, which begins on Sunday, July 7, in Orange, CT, against the winner of the District 4 championship. We know that the Wilton girls will be tremendous representatives of both District 1 and the Town of Wilton.  Best of luck, ladies! 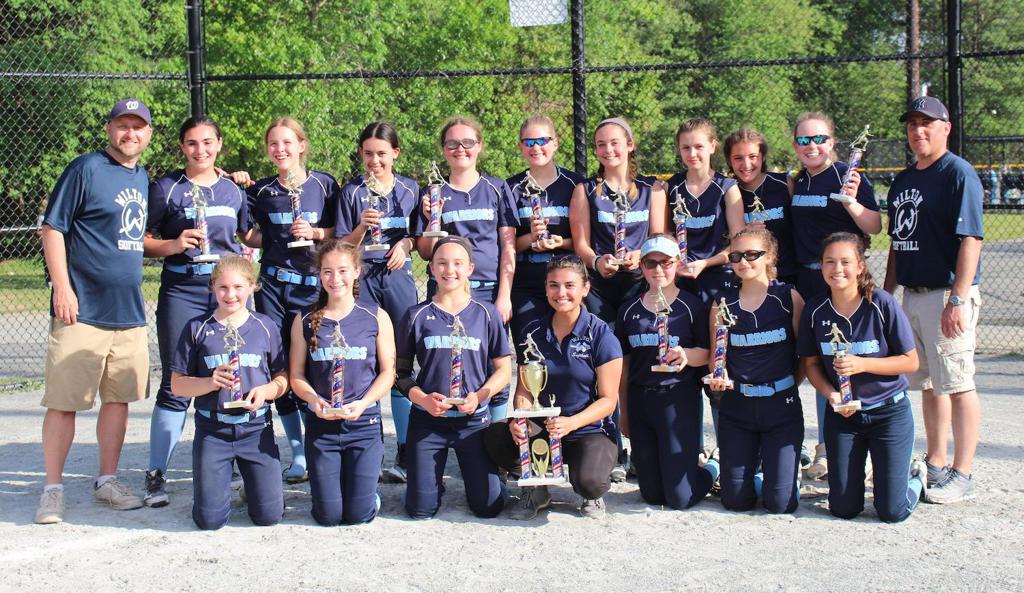 Wilton Warriors took on #3 CT Bullets for the semi-final game. With the Bullets scoring two runs in the first inning, Wilton scored two runs to tie the score in the bottom of the first. Wilton took the game home after seven innings, winning 6-3. Spinelli pitched another complete game with six strikeouts.

In the championship game, Wilton faced the undefeated #1 seed, NP Velocity. Facing a tough pitcher, the Warriors were down 2-5 after three innings. The bats came alive and Wilton rallied back to put some hits on the board. Wilton took the lead 7-6 after the fourth inning. Wilton increased its lead to 10-6 with Jenna Soltis hitting a triple and Spinelli with four hits and three RBIs. However, Velocity tied it up 10-10 in the seventh and took the game to extra innings. Under the International Rule of Tie Breakers, Velocity took the lead and won in the eighth 11-10. The Wilton Warriors took home the second place trophy.

In early May, the Wilton Warriors 11U Softball team competed in the 11th Annual Sunrise Cottage Benefit Tournament in Ridgefield. They proved to be a strong contender finishing 3rd overall in the 12U bracket.

They opened the tournament with a 13-0 romp over the 12U New Canaan Rams. Sofia Samai pitched a great 3-inning shutout allowing only 2 hits and striking out 3 batters. The offense was led by Ellie Qudeen who went 2-2 driving in 4 runs. Kelly O’Malley, Annie McMahon, and Grace Qudeen also had hits for RBIs to secure the win.

The team followed up with a 10-3 win over the 12U Rowayton Hurricanes. The offense came to life with Ellie Qudeen, Kaitlin Feldman, Grace Qudeen, Grace Couch, and Ava Gaudio who all had hits for RBIs. Sophia Viggiano and Annie McMahon played a strong defense game. Grace Couch commanded to mound allowing 3 runs on 1 hit while striking out 10 batters.

Their final pool play game ended in a heart-breaking 2-3 loss to a strong 12U Danbury P.A.L team. A strong pitching duel combined with big defensive plays made for watching a great game! Sophia Viggiano, Emma van Heyst, Kelly O’Malley, and Riley Keane all had major plays in the field to keep runs from scoring. Kaitlin Feldman pitched a great game allowing only 3 runs on 5 hits and striking out 5 batters.

On April 28, Wilton Little League hosted its very first local competition for Major League Baseball’s Pitch Hit & Run program.  Despite less-than-ideal weather conditions, more than 80 boys and girls (ages 7 through 14) competed in the event at the Wilton YMCA.  The event consisted of three competitions — throwing accuracy, batting distance/accuracy and running speed —   The winners in each category, together with the overall winner in each division/age group, have qualified for the Sectionals event that will be held on May 25 in Stratford. 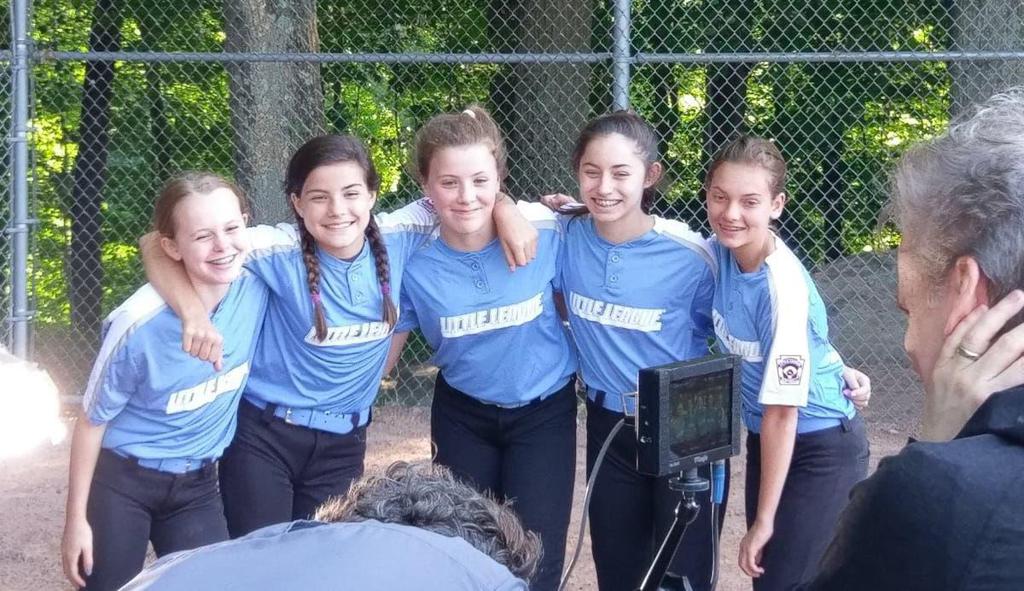 as reported in Good Morning Wilton

Last Friday, Wilton Little League softball players got a taste of stardom when they were asked to be part of an ESPN video shoot for the national Little League Baseball and Softball organization.

The crew filmed a game between Wilton’s 11U and 12U District teams. Little League provided special uniforms for the girls to wear. The video will be part of a segment on Little League softball that ESPN will air during the Little League World Series. 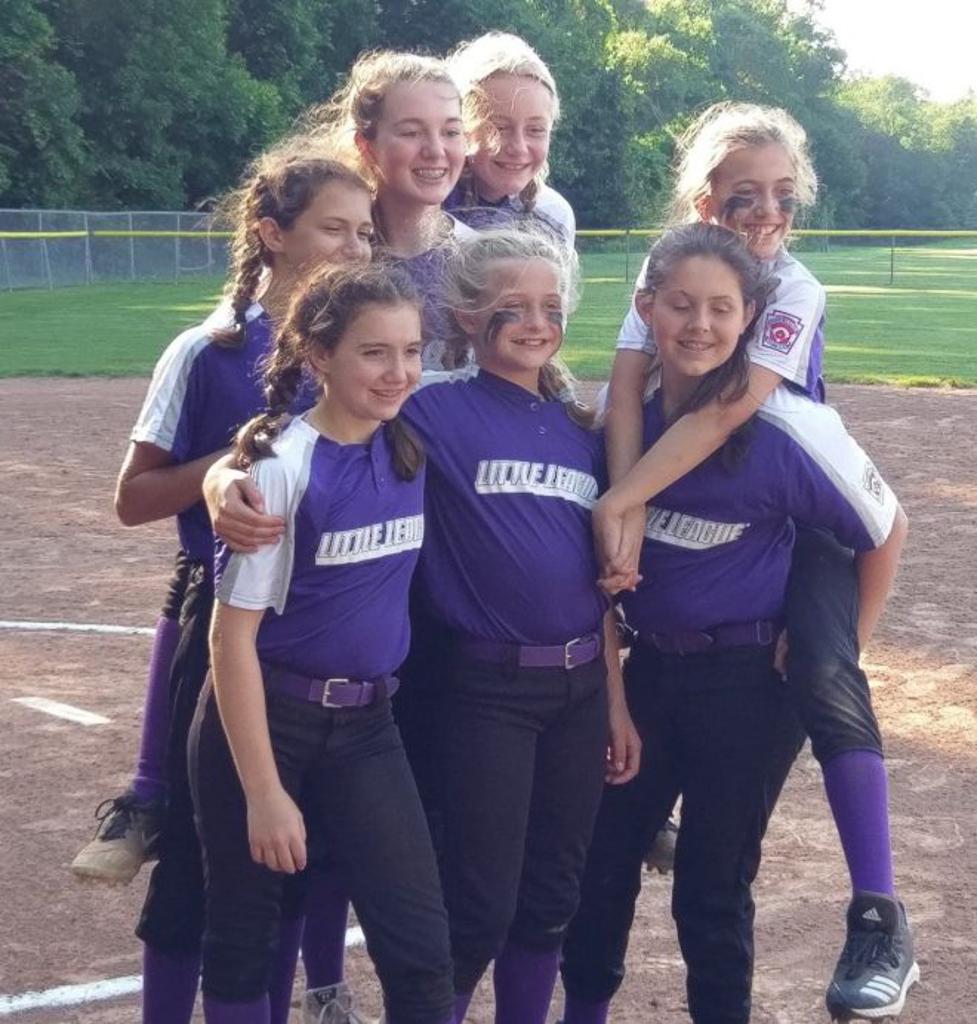 We have had lots of interest in our new Challenger team.  Hopefully the FAQs below will answer your questions.

The Little League Challenger Division® was founded in 1989, and is Little League’s adaptive baseball program for individuals with physical and intellectual challenges.  You can enroll here

Players must be between 5 and 21 years old.

What kind of commitment is it for the players?

Currently we play about one game a week.

What are Challenger buddies?

Our Challenger program can’t run without our buddies.  These are individuals in 8th grade and older who help to assist the players in the field through out the games.  You can register to be a buddy here.

Are all of the games in Wilton?

There are Challenger teams all over Fairfield County.  We have both home and away games.

Do I have to sign up to be a buddy each season?

No, once you have registered as a buddy we will keep you on the list until you ask to be removed.

We are excited for the launch of Wilton Softball and want you to be a part of it too.  Submit your idea for our new logo by June 30th.  The Softball community will vote for the winner.

All designs must be submitted by email .  Designs may be hand drawn or digitally created.  On or after July 1st, designs will be displayed online to allow our softball community to vote for the winner.  The Wilton Softball board reserves the right to narrow down the number of entries prior to the online voting.  If your design is selected as the winning entry,  you are assigning your right and interest in your design to Wilton Softball.  Entries must be your own original work and must not  violate any copyright rights. Wilton Softball reserves the rights to modify the winning logo to best fit the needs of the organization. The winner will receive  the final logo on an apparel item of their choosing (up to $50 in value).

Wilton Softball was formed to establish an active fastpitch softball organization in the town.

Beginning with the 2019 season, through a partnership between the WLL and the WBSA, Wilton is officially merging its Recreation, Travel, and High School Booster Softball programs to create one organization, Wilton Softball. This merger will create many synergies for the sport which will benefit players, parents and coaches alike.

The priority for the new organization will be to provide the best environment it can for the continuing development of players to allow them to be successful for as long as they want to play the game.  Wilton Softball believes this can best be achieved through a single organization dedicated to girls softball, from t-ball through High School.  A dedicated organization will create a single voice for the sport in Wilton, with an aligned set of resources dedicated to the girls.

Wilton Softball’s mission is to promote, organize and support athletes in fastpitch softball development from the youth level all the way through to the high school level. Wilton Softball seeks to instill in its athletes the ideals of good sportsmanship, honesty, loyalty, courage, and teamwork so they will grow to be well-rounded, healthy adults. 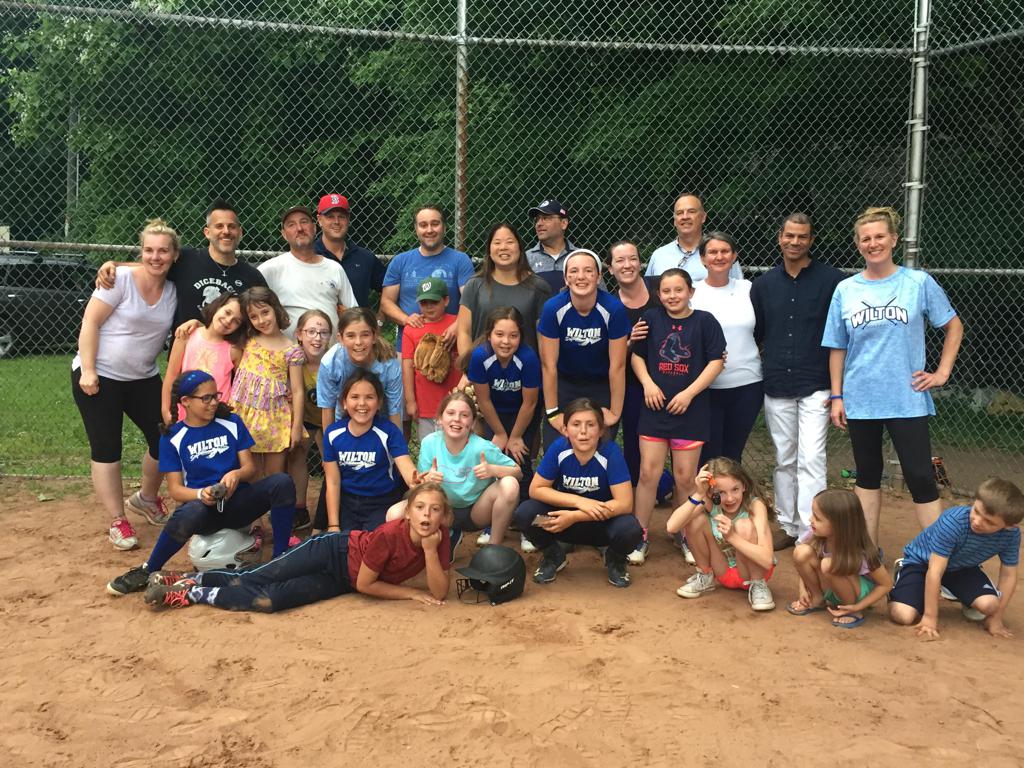 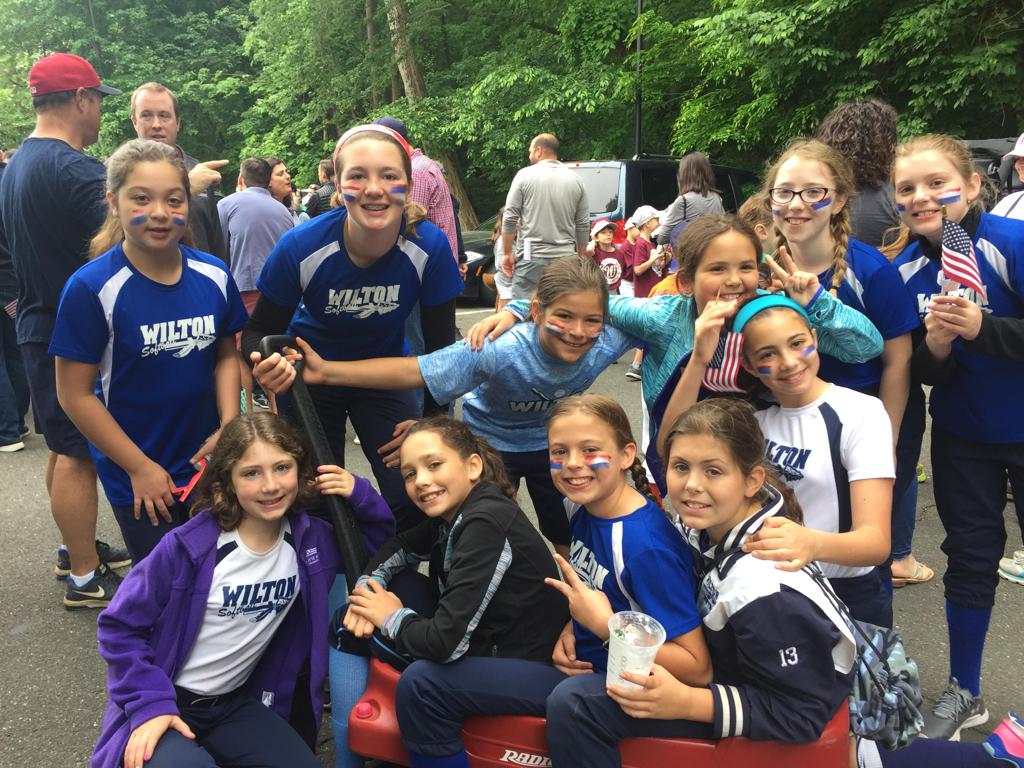 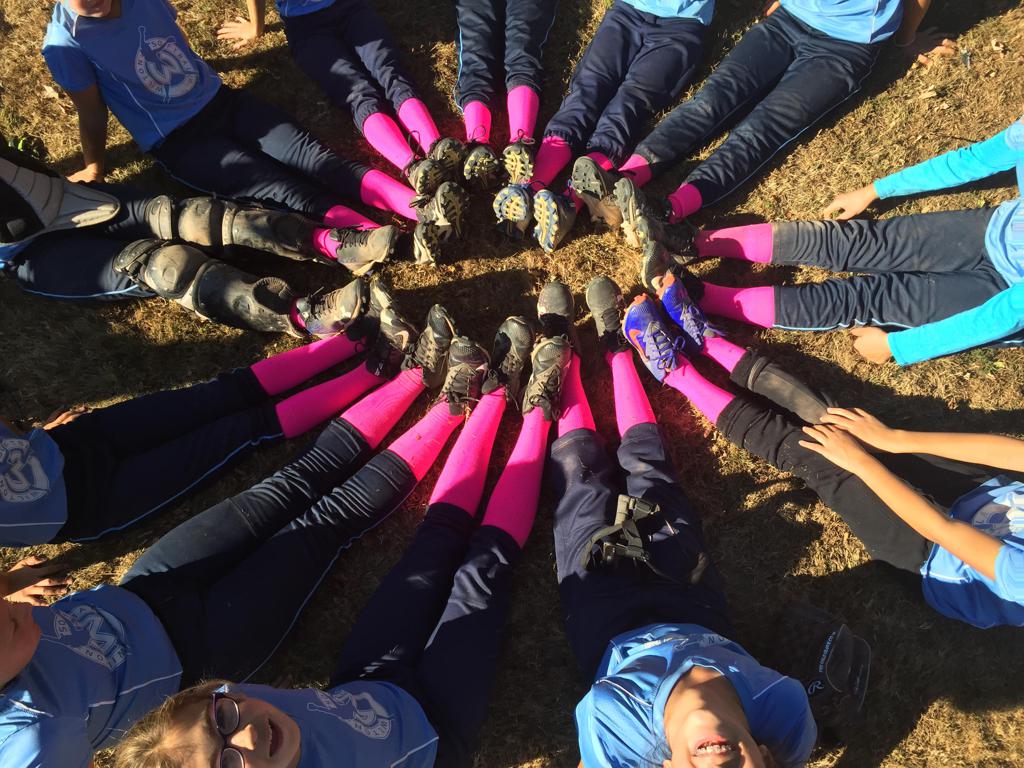 Rookie League registration is 𝗢𝗣𝗘𝗡! 🥎 Sign up by Feb. 22 to secure your spot for the spring season 🔗… https://t.co/Pp92E0OQii